Are you a complainer? Do you want “stuff” but don’t have it? Perhaps this lesson from Jabez might teach us all a practical lesson in trust, belief, and faith.

“you don’t have because you don’t ask; you ask and don’t receive because you ask wrongly” [James 4] but Jabez did ask and asked correctly. And God was pleased! God answered. Let’s see why: 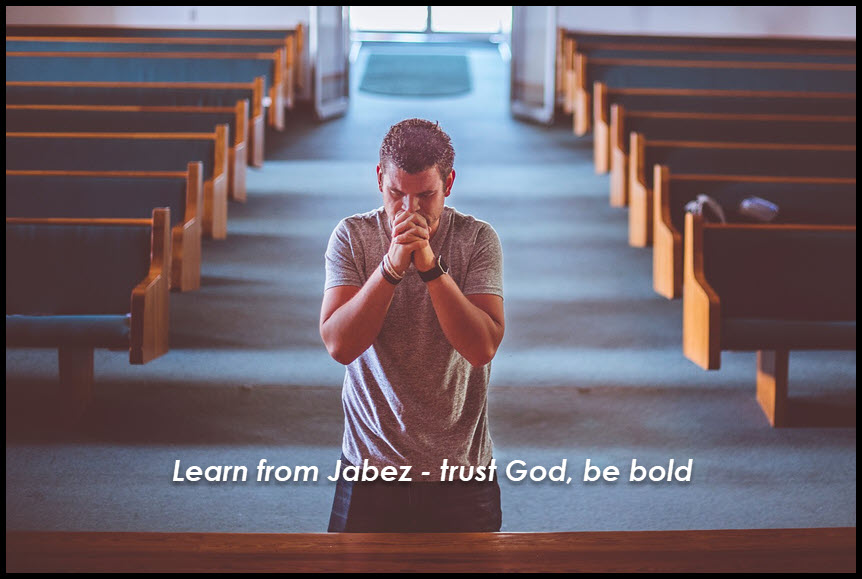 Our story begins in the birth canal where Jabez struggled to come forth. It seems that Mother recorded that fact or reminded him of it throughout his life. Of all the men listed in this lengthy genealogical record, only Jabez is given the honor of his life’s story in a nutshell. It is as if the Chronicler wants us to note him. Jabez was “more honorable than his brothers.” He believed he could ask God all things and God would answer. That is true faith. Jabez was a God-fearer-worshiper. While others were busy with idols he was busy talking to God.

Jabez began: “if  you…” He simply told God that he wanted believing God would hear and answer. He precisely noted what that blessing would entail and included simply, protect me. For some reason he wanted or sensed he needed a hedge of protection and that he might not endure pain. That closes the circle from Mother’s words; I brought you forth in pain.

So why did the Chronicler insert these two verses? Could it be that too many of us are busy “working” our way to heaven rather than just seeking God who is generous giving His perfect gifts to those who believe Him.

Take a lesson from Jabez. Simply be bold and ask God to bless you.