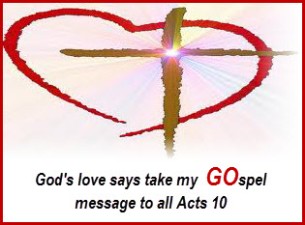 How appropriate that today when the world stops and offers messages of love to one another we read a chapter that demonstrates what true love is through the lives of two men who earnestly desire to please God. Jesus had commanded his disciples to go to the uttermost part of the earth with the gospel message thus opening the door to all, Gentile and Jew…but the Jew was hesitant and so being a God of love He divinely orchestrated a meeting between a Gentile–Cornelius and Peter–a Jew, that His message of love may go forth.

We first meet Cornelius, a Roman Centurion, full of faith and charity to his fellow man. He was a man of prayer and a “God –fearer” and he walked in the revealed light that he had. It happened when he was in his prayer time that God sent one of his angelic visitors who directed him to send for Peter. It is obvious from this encounter that Cornelius did not know who Peter was but amazingly the Apostle Peter was in Joppa which is about 30 miles away. As Cornelius prayed, God was preparing Peter for his next day encounter with a Gentile. While Cornelius obeyed instantly the messenger of God, Peter was not so willing to obey as we hear him once again say “no Lord!” Thus God’s message had to be repeated three times and even then he didn’t get it.  And so the Holy Spirit comes and boldly tells Peter, “get up, go down, and accompany them without hesitation, because I have sent them.” And he did.

In obedience Peter complies by welcoming the Gentiles, feeding them and giving them rooms to sleep all in obedience to the Holy Spirit. Think an angelic visitor watched over this house that night? Could be! On the next day Peter, along with 6 other Jews, accompany Cornelius’ two servants and the soldier to Caesarea where he would have the marvelous opportunity to share the gospel message and see Cornelius’ family all come to Christ.  Here’s what we can learn from this chapter:

Where is God opening a door for you to share the good news to someone? Which man do most resemble?  Will you step out in faith and obey?