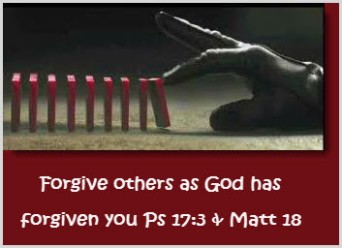 Recently there was a domino contest to see how many dominoes could be erected and then sent cascading down one upon another.  The Guinness world record was shattered when 275,000 dominoes fell one after another revealing a stunning picture before the audience of onlookers.

How long a line of dominoes have we erected of those whose sins we are unwilling to forgive just as the wicked forgiven servant in Matthew 18 did? He erected his own set of dominoes and kept adding to them one at a time. He had the power to topple them by just echoing the one word “forgiven” just as he had received from the Master—but he refused to do so. He failed to look back and see his line of dominoes not standing but lying for the Master had graciously and mercifully chosen with a flick of His finger to send them toppling to reveal a beautiful picture of forgiveness and cleansing.

The question then before us is; will we keep erect the dominoes of other’s sins against us as a reminder of their hurt or will we willingly offer the cup of cold water, the words of forgiveness to God’s chosen people who have also been forgiven by Him? Listen to Jesus: “Lord, how many times must I forgive my brother who sins against me? As many as seven times?”  Jesus said to him, “Not seven times, I tell you, but seventy times seven times; unlimited times!” [Matt 18]

Let’s dig deeper. Suppose we asked God to do as David did by asking Him to examine us in the night. Would our dominoes remain standing or fall? Look at what David said: “you have examined me during the night. You have carefully evaluated me, but you find no sin. I am determined I will say nothing sinful.” When we can pray those words back to God each domino we have erected will fall one after another until a beautiful picture of total forgiveness lays before us and others.

So today, Beloved, gather your dominoes and with a flick of the finger send them cascading into the beautiful pattern of forgiveness. Let them lay there for awhile as you muse what God has truly done. And then you can recite Ps 17:15 as your prayer to God for this new day: “As for me, I shall behold Your face in righteousness; I will be satisfied with Your likeness when I awake.”

Remember these wise words when you consider your choice. Ralph Waldo Emerson wrote, “the Gods we worship write their names on our faces; be sure of that . . . thus, it behooves us to be careful what we worship, for what we are worshiping we are becoming.”