In  John 1 the Apostle John  writes: We saw his glory – the glory of the one and only, full of grace and truth. Yesterday we noted that Philip said to Nathanael, “Come and See.” “When God gives us eyes to see the glory of Jesus—his beauty and greatness and worth—that seeing is the laser beam, as it were, along which great grace streams into our lives. Grace to love. Grace to rejoice. Grace to live forevermore.” [Piper] As we now move to view the first miracle we read again: 2:11 “Jesus did this as the first of his miraculous signs, in Cana of Galilee. In this way he revealed his glory, and his disciples believed in him.”

The two incidents in this chapter, the water turned into wine and the cleansing of the Temple, point to the power and majesty and glory of Jesus that He chose to reveal at opportune moments for one reason: that they may see and recognize He is the prophesied Messiah, the glorious Son of God. Jesus is as JB noted: the Chosen One of God. He has been made manifest that we may see our depravity when we stand in his presence and desire and seek his holiness and righteousness. Come and See the Chosen One who took what was deficient and provided the ample. Come and See the Chosen One who took the defiled Temple and cleansed it for worship. Both are pictures of what he does for each of us personally. We who are deficient in our own capacity he fills with the new wine of his grace and provides us with his love and righteousness. Our temple is defiled but he cleanses it with his blood making us fit for heaven.

To the unbelieving he answers with a riddle/parable: “I speak to them in parables: Although they see they do not see, and although they hear they do not hear nor do they understand,” but with those whose heart and eyes see and believe, he shares his glory. The religious leaders see with their physical eyes but are spiritually blind to the Savior. Instead they seek more miraculous signs. Jesus responds “Destroy this temple and in three days I will raise it up again.” He did not say “I will destroy” but said  ““You” destroy”” thus prophesying of his death and resurrection. The contrast could not be more black and white. The religious leaders come and see but remain in their darkness while the people who are only bystanders come and see and their hearts and eyes are opened and believe.

There is another nugget of beauty hidden in this chapter which we might just readily pass over but it is the same word used three different times: “believed.” The word has the idea of entrusting, put faith in, conviction and trust, saving faith. When his glory was revealed to the religious leaders they sought a sign. When his glory was revealed to the disciples and the temple bystanders, they believed/trusted in/put their faith in him. Matthew uses the idea of the eye is the lamp of the body. If the eye, like the window into our soul, is covered with grime, our view is distorted, but if our eye is clear we can see what is revealed clearly. Where has Jesus revealed or made manifest to you what was previously unknown but now is clearly revealed, that is his glory, and how will you respond?  Jesus shared his glory with those whose hearts and eyes were open and ready.

Is your heart and eye open and ready this day to receive his glory? 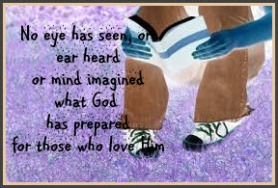