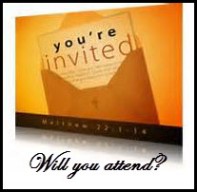 As Jesus ended his earthly time with his disciples he had them prepare the Passover, his last meal with them before the cross. He emphasized that as they partook of the bread and wine that it represented his body and his blood shed for them. Although they did not totally understand the significance of this night until after the Resurrection, they quickly instituted what we know as Communion. In this way they obeyed his command to remember his death until he returns and when we may all celebrate it with him in heaven.

In Proverbs 9, Solomon used an analogy of two banquets prepared by Lady Wisdom and Dame Folly. Lady Wisdom is busy preparing a dinner for the guests, the naïve who lack understanding, sending out the dinner invitations to come and feast at her table. The invitation reads: “Blessed is everyone who will feast in the kingdom of God!” She sends her slaves to gather those invited to come. In contrast Dame Folly, who is naïve and does not know anything, sits at the door of her house calling to the passersby, come and taste of the “stolen waters which are sweet.” This reminds us of the parable Jesus taught in the NT of a king who prepared a wedding feast for his son and invited many guests. However, those who were invited offered excuses and would not come. Thus he said ‘the ones who had been invited were not worthy.” Why were they not worthy? They did not come when called.

Our King is busy preparing a sumptuous banquet for us and invites us to come. Will we offer excuses or be ready? God’s banquet leads to life eternal but Dame Folly’s only offers separation and death.