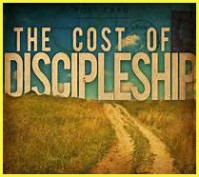 We are often reminded of this wise counsel of “A person plans his course, but the Lord directs his steps.” [Prov] But along with this God often, but not always, brings others alongside us to give us moral support, when we seek to do God’s will and His work. God also often through the still small voice reveals what may lay ahead for the choices we make. As we re-read Acts 9 Christ spoke to Ananias about Paul’s life ahead: “this man is my chosen instrument to carry my name before Gentiles and kings and the people of Israel. For I will show him how much he must suffer for the sake of my name.” If God should ordain that you suffer are you as willing to drink that cup as Paul? If truth be known we shy away from this and forget the principle of  Luk 14:28 “counting the cost…?”

As we have been reading the journeys of Paul we can see that he in fact counted the cost and was willingly ready to face the words “you will suffer.” As he taught new believers and prepared to re-enter Jerusalem did the words of Jesus to his disciples in Matt 20 come to be his daily reminder of Jesus’ suffering? Is this why he could like Christ say:  I am “compelled by the Spirit, I am going to Jerusalem without knowing what will happen to me there, except that the Holy Spirit warns me in town after town that imprisonment and persecutions are waiting for me.”  In Acts 21 Paul hears from precious believers not to set foot in Jerusalem and again the prophet Agabus came to see Paul and role played this scene:  “he took Paul’s belt, tied his own hands and feet with it, and said, “The Holy Spirit says this: ‘This is the way the Jews in Jerusalem will tie up the man whose belt this is, and will hand him over to the Gentiles.”

Had you been in the hearing of all of these words what might have been your reaction and what would you have counseled Paul? The people begged him not to go up to Jerusalem. To that Paul responds: “What are you doing, weeping and breaking my heart? For I am ready not only to be tied up, but even to die in Jerusalem for the name of the Lord Jesus.” Hundreds of years later William Carey heard much the same: “When God pleases to convert the heathen, He will do it without your aid or ours” and yet he resolutely and steadfastly set his heart to go forward.  The reason both men were able to face those who would seek to dissuade them was because of their life’s choice: “But what things were gain to me, those I counted loss for Christ.” [Phil 3]

Beloved, perhaps the Lord has touched your heart and called you to ministry or some avenue in which you need to count the cost.  Parents, friends and sometimes even Pastors counsel you to “count the cost” and even seek to dissuade you from this course of action just as the early believers did for Paul and later, William Carey, missionary to India. “The world seems to offer two kinds of support: “Wait ’til you get out in that cold, cruel world. It’s rough!” And those who exude a contagious, confident “Bon voyage!” [Neal Pirolo] When you know that the Holy Spirit is directing your steps do you trust HIM or listen to those who are giving you counsel that is opposite to that? 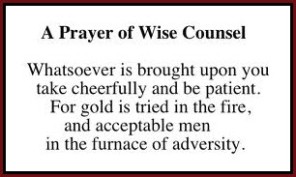