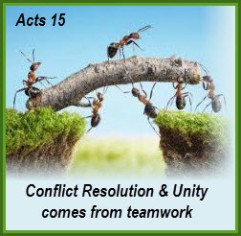 The animal kingdom teaches us much about behaviors, how we (animals and humans) act and react to conflict which is inevitable due to the fallen sin nature. Some of these behavior might be found lurking in our church body. For example; meet the shark- alias the dictator…do it my way or you will be my dinner; the woodpecker-alias nagging faultfinder–I look for your ‘bugs’ and come knocking over and over;  the ants-alias team builders looking for ways to bring about resolution to problems by being steadfast to unify the Body of Christ.  I am sure you have noted others in your community with similar nicknames and behaviors. There are at least one or more of these personalities in our midst today just as they were in Antioch in Acts 15. Their aliases are revealed as well as their motives.

First to surface were the legalists who arrived on the scene with supposed credentials from the Jerusalem church. They were the sharks and woodpeckers with these items on their agenda;: “Unless you are circumcised according to the custom of Moses, you cannot be saved.” Translation: you are Gentiles and God only accepts Jews, so if you want to be saved you must do it the way it has been done for centuries. Second to surface were the busy ants of reconciliation and restoration; Barnabas and Paul. The sharks and woodpeckers nagged with their legalism but Barnabas and Paul sought to build unity. The sharks and woodpeckers insisted on circumcision and the Law of Moses for salvation. Paul and Barnabas insisted on faith alone. Clearly this was a problem that needed resolution and so the church wisely sought an outside mediator by sending all parties to Jerusalem to resolve the issue. In Acts 15 we learn the basics of how to resolve conflicts.

It seems from this crucial chapter that James formulated his own letter at a later date based on what he learned from this conflict. You can read his letter to glean his ideas and thoughts. Today perhaps you have woodpeckers, sharks and yes even ants in your church or family. May you resolve your conflicts as the early church using biblical steps. Our motive should be restoration not division lest we open the door to the enemy’s ways.