Today in Luke 5 we will come across the question that is still being asked today. The religious leaders asked: “Who is this man who is uttering blasphemies? Who can forgive sins but God alone?” The religious leaders were really asking who does he think he is; God? Yes that is precisely who he not only thought he was but went on to prove. He proved that he was and is not only the Son of Man but He was and is God in the flesh. He not only had the power to forgive sins but also to heal. He did the harder, forgiving sin, before he did the easier which was to heal so that those who asked and saw might be without excuse. The miracles of healing and forgiving require supernatural power and Jesus proved he had both.

But, back to the question: Who is Jesus? Is he God? Can he forgive sins or is he just uttering blasphemies as they charged? Over and over through the book of Luke we find the same question being asked by the religious leaders, the political leaders, the disciples and even Jesus himself.

The religious leaders asked: Luke 5:21 Who can forgive sins but God alone? Luke 7:49 “Who is this, who even forgives sins?”

The disciples asked: Luke 8:25 “Who then is this? He commands even the winds and the water, and they obey him!”

Even the political leader Herod asked: Luke 9:9 Herod said, “I had John beheaded, but who is this about whom I hear such things?”

Even Jesus asked: Luke 9:18 Once when Jesus was praying by himself, and his disciples were nearby, he asked them, “Who do the crowds say that I am?”

And lastly Jesus asked the disciples: Luke 9:20 “But who do you say that I am?”

This is the critical question. Who do you say Jesus is? Is he just a baby in the manger or the one who is born king of the Jews? Have you seen his star when it rose and have come to worship him?  Is He just a good man, a good teacher, a prophet or is He the one who “came to call sinners to repentance?” Is He Your Christ who died for your sin on the cross? Your answer will determine not only your now day to day life but your eternal destiny. Jesus had the answer: “I am THE way, THE truth, THE life, no man cometh to the Father but by me.”

Do you know Him? Have you met Him? And if you have met him have you picked up your stretcher, walked home glorifying God? 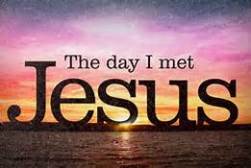