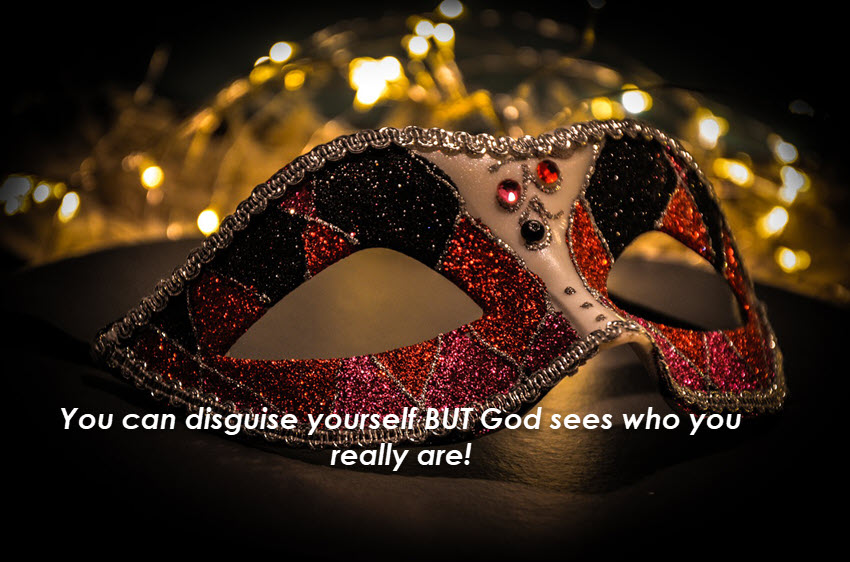 Children love to dress in a disguise at Halloween because they think others won’t know who they are. Jeroboam thought by sending his wife, disguised as just any woman would work as she sought help for her child. But, God is God, and He does not see this as humorous! Is 46:9 says

And so the queen did as her husband King Jeroboam said. She disguised herself as just another woman as she journeyed to Shiloh. In the meantime, God spoke to the blind prophet Ahijah who was coming and also gave him a message for her. The son for whom she was seeking help would die just as she stepped across the threshold upon her return.

For a moment put yourself in her place. Imagine the shock of someone telling you that your son will die. Imagine her walk back to the palace. What would be on your mind? Imagine it happened just as the prophet had said. Then ask yourself; will I believe that God’s words are true? That is where she was at that moment in time.

You may try to disguise yourself but God sees your heart. He sees your motives. He sees the situation. How often do we attempt to disguise ourselves so the world doesn’t know us a believer? But, if God wants someone to know us, He will reveal who we are so they may decide that the God we say we serve is truly God.